Film Music was composed for a commercial video project for sculptor R. Carlson. Originally scored for piano, string quartet, and synthesizer, this version has been arranged for piano, cello, and flute. Though I am usually a structural composer, this piece was written quickly and entirely from a visual perspective to conform to the visual content of the video project. It has a very simple surface texture with themes, transitions, and modulations from section to section.

Music for Wallace, for piano

While living in Somerville, MA for a couple years, we adopted an old, neglected spinet piano. We named the piano Wallace. I wrote an album of short, mostly simple pieces for Wallace, a few of which will be played at the Salon. 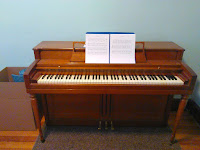 The Trees Awaken, for alto flute, cello, and piano

This tone poem describes a sleeping forest that comes to life with dancing tree folk before returning to its slumber. I used a mostly traditional tonality with an emphasis on open 5ths and 6ths and a folk tune like melody in the middle. The low open double stops in the cello help to evoke the breathtaking size of the forest while the alto flute plays a mysterious sounding melody. The tremolo in the piano describes the restlessness of the trees as they come to life. The middle section of the piece is labeled “Heavy Footed Dance”. The loud, low, and heavy repeated rhythm describes the impact of their heavy roots/feet. The piece winds down with quieter repetitions of the dance theme before returning to the peaceful theme from the beginning.

Programmatically this piece depicts a person with a very short attention span going for a walk. He intends to get exercise but is distracted by everything he encounters.

Musically tries to be traditional in both sound and form but immediately gets lost and never finds its way again. This is a lighthearted work that never takes itself seriously. The listener should not, either.

September 25, 2018
Hello Friends of the Seattle Composers' Salon, I just wanted to put up this post for those who might visit this site... The Salon is taking a short hiatus, but will be back in 2019 with new events and some new ideas. We appreciate all of your support over the years, and we want to thank John Teske for his wonderful curation for the past few years. John is stepping down as curator, and we will be working on a new direction for the Salon in the coming months.
Read more