I’ve been putting a group of solo pieces for a program together, and the feeling of this piece is of a long journey, as shown in the first movement, “Narration”, where a particular note series seems to define a road or path. The general sound of the instrument seemed to suggest characterizations, especially in mvt. IV. “Side Shows”, which has a circus-like environment. The piece has been performed on Tacoma New Music and on a concert, At the Western Front, a US-Canada composer exchange program. 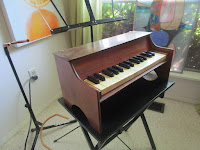 Earlier this year—having been dutifully plodding along, working out yet another overly ornate concept for yet another solo piano piece—I was brought up short by Amy Denio’s lovely solo accordion melody “Ghosting”. I immediately knew I wanted to work with it somehow. Amy graciously gave her permission (thank you thank you thank you!) so I ditched the overly ornate and wrote three separate pairs of not-quite-one-to-one counterpoints. Doubles, in the baroque sense: not so much variations as transformative screens or filters. Of those three I will present one: “Ghosting Doubles (second sighting)”.

“Reforming the Recognizable” and “Still Here, Anew” are the final two movements of Eden Untamed, a piece dedicated to a fellow composer’s rumination on what it means to be and act as a composer. A short melodic idea of his was the basis of all the harmonic and motivic development to challenge myself to slowly exert as much control as possible over the piece. The third movement is the final condensation of the idea into a single point. The fourth movement is the amalgamation of the structure of the first three movements balanced with a release of, what can vaguely be called, the oppression of caprice.

The first two movements, “Themes Amuck” and “Pieces of the Puzzle”, can be found at: https://soundcloud.com/jessiharvey_composer.

The inspiration for this work in-progress was waking up one Sunday morning in 2016 hearing what the tune “Restoration” from William Walker’s compilation Southern Harmony might sound like if performed by the great Texas Gospel blues slide guitarist Blind Willie Johnson. Movements 3 and 4 together form a traditional sonata form. However, drawing some inspiration from Hepokoski & Darcy’s concept of “rotation” (and some from cumulative form in the work of Charles Ives) I present “Restoration” as the basis for a ragtime theme in the sonata exposition (theme 2) that becomes the set of variations on “Restoration” as a slide guitar homage to Johnson in the recapitulation (aka movement 4), which can also be performed as a stand-alone movement. The third theme/coda material is derived from the subject of a fugue that will be the first movement.

September 25, 2018
Hello Friends of the Seattle Composers' Salon, I just wanted to put up this post for those who might visit this site... The Salon is taking a short hiatus, but will be back in 2019 with new events and some new ideas. We appreciate all of your support over the years, and we want to thank John Teske for his wonderful curation for the past few years. John is stepping down as curator, and we will be working on a new direction for the Salon in the coming months.
Read more